TECHNOS & PSYCHE: A Prelude …and other poems

Technos & Psyche, A Prelude is a long narrative-style poem that introduces Technos, superpower god of today’s technology, and Psyche, divinity of soul, and tells of their first encounters, placed in Santa Cruz, in the mythos of the poet. The poet himself enters the story in the last section. This narrative embodies probably the most important archetypal theme of the 21st Century. It is a highly visual poetic experience. The other poems provide reflection on our technological world.

Muse,
You were first to inspire me—and how many songs
of the great Song my Tongue learned of You & sent forth,
encourage my Song to be written now—
Help me to articulate this critical & urgent theme of our day,
our transition between World Ages & the global contention
between two Powers: Modern rise of superpower Technos
& Its grandiose Plan
and New Age Divinity Psyche offering a Vision
of humanity’s healing
& of the most needful Integration between them.

Muse,
pour into me the poet the Golden Art of Mythos,
help me now in the launch of this unending epic of evolution,
a Story that promises the widest sweeping of theme,
& explorations of extrapolated futurity opening to all Aquarian
dispensation possibilities.
Pour into me now the words, telling first of imposing Technos,
who or what this new Power is & Its Plan—
Begin Muse, help me to tell of this Vision I see… 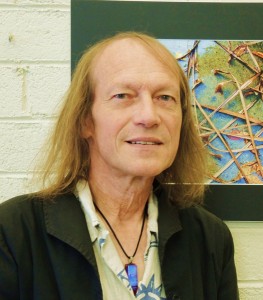 “The Lamp of Psyche”
Poet of the New Age

Visionary poet and philosopher/interpreter of life Ron Lampi has published ten books. He resides in Felton, California where he actively performs his work publicly.

She says, Wake up—

And you do what everybody does in the game—
You are Anybody on the highways, at the gas station,
at the checkout counter, under the surveillance camera,
each transaction your credit card enters the data bank.
Every step you take, every stop, Google knows it.
You are Anybody to the global elite, caught as a pawn
on the gameboard of the Powers That Be.

And a Voice comes through the Air—
She says, Wake up! Wake up!

And planes come overhead, spraying over our heads—
They make lines, they grid the sky with toxins,
they haze out the Sun, no more clear skies of afternoons.
Your eyes look up, your eyes glaze over, you glance away—
Oh, your smartphone just buzzed again, time to text…
Or is it time to buy that bright shiny blue car?

And the silky, mesmerizing Fabrication spun by msm
smooths out all the kinks & frizz of daily confusion,
helps diffuse all the unnecessary questions—
Yes, turn on Big Momma TV comforting with
the milky nipples of soothing entertainment…
propaganda.

And you say, I give up making sense of any of this—
I find only life unreal, smiley faces of emptiness,
I am flooded with thousands of IV injected images.
It all blurs—is it news or fake news? Information
or disinformation?
It’s another shooting…I think I’ll go to another movie…

And that little screen in your face hypnotizes,
linking you up with your social virtual reality,
your alter-life avatar going to connect you into
The Internet-of-Things, defining who you are—
I will become a techno-human, a cyborg upgrade,
I obey my all-knowing almighty algorithm,
I worship at the church of Dataism.

And a Voice comes through the Air—
She says, Wake up! Wake up! Wake up!
It is time to lift the Veil, change the rules of the game,
ascend to a higher level of a greater cosmic Vision—
You are now the co-creators of another game.