Who will speak truth to the Master of Mendacity?
“The Spirit of Elijah Cummings Speaks”

Stuck in the cloistered terror of a pandemic, it’s hard to remember the brawling days before and after the 2016 election, the furies released by the Kavanaugh hearings, our stunned grief at the death of Elijah Cummings in October, 2019. That seems lifetimes ago. Yet the 2020 election, perhaps the most consequential of our lives, is looming.

Dreaming Night Terrors is a chapbook of political poems from the time before Covid 19. Written in outrage and sorrow, these poems are Naomi Ruth Lowinsky’s offering to the spirit of Elijah Cummings. He advised us to “speak truth to abuse.” He reminded us that our resilience comes from our constitution, which is based on the separation of powers. Were he alive today he would urge us to organize, raise money, write rants, vote, do everything it’s in us to do to remove the current administration, its chaos and corruption, its mendacity, cruelty and cult of personality. This is our moment, even as we shelter in place and gather on Zoom, to defend our democracy, honor Elijah, and reclaim our responsibilities to each other and to the earth. 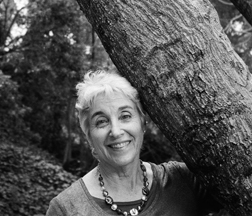 Naomi Ruth Lowinsky comes from a family of refugees who fled Nazi Germany. Her poetry has always engaged the political, but during the Trump era it has become an emotional necessity to make poems out of night terrors. A widely published and anthologized poet, she is the winner of the Blue Light Poetry Prize as well as the Obama Millennial Prize. Her fourth poetry collection The Faust Woman Poems follows one woman’s Faustian adventures during the 1960s and ’70s through Women’s Liberation and the return of the Goddess.

Lowinsky is a Jungian Analyst and a member of the San Francisco Jung Institute where she has taught a poetry workshop, Deep River, for over a decade. Her new book of essays, The Rabbi, the Goddess and Jung, contemplates what the Kabbalah calls the “beyond that lies within” — the still small voice of the Self, and the wisdom that comes from dreams and active imagination. She is the Poetry Editor of Psychological Perspectives, and blogs about poetry and life at sisterfrombelow.com