Covered in Cats: Stories of Felines and Other Astounding Beings

Anita Camera, who is an energy healer of animals and humans, has been writing stories of her life, travels, and loves — in particular, CATS! — for more than thirty years.  This collection of cat stories, along with a few stories of other endearing animals she has encountered, is accompanied by more than 50 images from her vast photo archive capturing the charm and antics of these furry heart-breakers.

You can connect with Anita on Facebook @CoveredinCats.  For more information about online treatments & readings for you and your pets please go to Facebook @UnicornCodes or e-mail reikicolorlight@gmail.com

PART ONE — “I Could Have a Cat Now . . .”
How It All Began
Pommie
Oh No, Not Again!
Tiny
The “Most Perfectest” of Cats
Bubu’s Birth
Bubu’s a Girl?
CommuniCATion
Family Dynamics
Stranger In A Pub, or “This One’s Got a Sister!”
Gingey-Morgan (Garfield)
SuperKitty.
The Cat That Thought She Was a Cow.
Little Sweetie Has a Plan
Kitten School.
Sedona Spirit – The Real Skinny
Sapora Goes Wild
Sapora Knows a Secret
The Fabulous Miss Mizzle
Kitty Dreaming: Forrest and Sierra
Jessie and Sapora: Thick as Thieves
Covered in Cats
Feline Secret Service: Jack & Matahari
Simba, The Lion Cat King
Silver Hires A Body Guard
The Thespians – Jasmine and Mercury
Bottle Kitties’ Trip to the Pub
Sadie and Ely
Tommy Takes His Place Among Rainbow Kitties

PART TWO — Healing Adventures or “Who Heals Whom?”
Healing With The Invisible – What Brodie Taught Me
About Energy
Embarrassment By Intuition or How Jose Got His Legs Back
Lil’Bit – A Healing Journey
Pet Secrets
Dealing With the Loss of Pets

PART THREE — “I Know These Are Not Cats”
Tales of Other Astounding Beings
The Bear and the Goat
Willie and Sweetie
The Darnaway Mouse Escape / Frankie Hitches a Ride
What’s In a Name?
The Mop Fight
Butterfly Perfection
Updates

Anita Camera spent much of her life living and studying in Europe. She met many great teachers there, especially during her time in Findhorn, Scotland, where she began her journey with the healing arts. More than anything, however, she learned from cats and other animals that crossed her path, amazing and surprising her with their fascinating personalities and interactions. Anita is currently continuing her education with the animals of the Santa Cruz Mountains in California.

For more information about online treatments & readings for you and your pets please go to Facebook @UnicornCodes or e-mail reikicolorlight@gmail.com 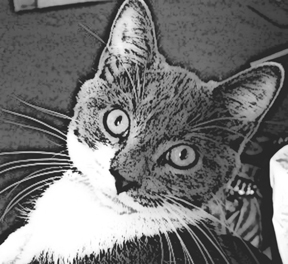 How It All Began

I remember a walk with my dad and my sister on a cold wintry morning many years ago. A little grey kitten came running out to me from the trees. Bending down to pick it up, I was in heaven holding and cuddling it for a while. I had always wanted a cat; it had been a dream as long as I could remember!

Unfortunately, we already were a large family and pets were not allowed at home, which is why in the end my dad chased it off. Our family was run on very authoritarian principles – parents’ decisions only – and I had absolutely no say in it. It could also be that my dad was very aware of what my mom’s response would be if he brought back her cat-crazy daughter with an actual kitten.

At the time, I could only force myself not to think about what would happen to that tiny little thing in the cold and the snow. Still, even now, after so many years have gone by, whenever I think about it I hope that someone else found it, someone who was able to give it a good home, where it could not just survive but thrive and enjoy life in a loving family with as many cuddles as its little heart could possibly desire.

Fast forward a good few decades . . . In the wake of a relationship breakup, I was again starting anew. It was a huge, exciting project, running a backpackers’ hostel and retreat in a big Victorian farmhouse-cum-mansion, something I had never done before, especially not on my own. There was a lot of ground around the house, peacocks were running free, and after a couple of months the thought suddenly appeared, unexpectedly: ‘I could have a cat now . . .’

Famous last words! No sooner had I had the thought an email arrived. Someone wanted to re-home two cats, a mother and nine week old son. ‘Oh well, I thought, surely two will be as easy as one, and they can keep each other company.’  and ‘It won’t hurt to go and have a look . . . I don’t have to take them . . .’

More famous last words! I went to have a look, stroked their heads and backs, said “There, there!” and an hour later I was loading cat mother, kitten and assorted cat paraphernalia into my car. To be honest, I really don’t know why they allowed me to take them with me as my inexperience must have been blatantly obvious.

Back at home I put cushions, beds and things in the workshop, which was really the old servants’ kitchen. I had decided that they would live there, and sometimes, when it suited me, I would let them come through into the nice part of the house with me.

Told you I knew nothing about cats!

My new housemates had lovely soft seats, toys that they were used to, food and fresh water – anything I could think of to keep them happy and well. Having reassured myself that everything was fine and dandy I made my way back through to the big room that was my own living space to sit down and ponder this, my latest stroke of genius.

It did feel a bit odd though. Somehow I couldn’t really settle that evening. Every half hour or so I got up and went through to the old kitchen to see how they were doing. There they were, Pebbles, the mommy, with lovely dark grey fur, and Brodie the son, grey and white, with a splodge on his nose, both so soft and silky that keeping my hands off them was actually quite hard.

I am not sure what did it in the end, perhaps Pebbles looking at me with her quiet ‘What’s happening to us?’ look, or Brodie with that little sheepish expression that even now he still shows on occasion. Whatever it was, sometime later that evening I picked up their cushions and beds and brought them through to where I was. They had wrapped me round their soft silky paws the very first night.

By the way, it took me a good two years, I think, until the coin dropped and I realized that Pebbles would have once been a little grey kitten. So, there, the tiny wee thing found its way to me in the end.

It was just meant to be because after all these years she was still sitting in a corner of my heart waiting patiently for the right moment to show up.

Because that’s what cats do – I know this much by now.