Angelita is an angel who has become lost in Earthly life. A fable of spiritual discovery, Angelita is everyone’s story, set in a time long ago when all humans and all angels lived together in peace and harmony. Angelita knows everything is good. It always has been. It always will be. Angelita believes that anything is possible. It always has been. It always will be. But then one day, she comes across an Old Poet who is weeping because he cannot write his inspirational poem.  At first perplexed, she has the answer: Angelita plucks one feather from her left wing, and gives it to the Old Poet as a Divine gift for his Divine poem.  So much for good deeds! This selfless act of generosity leads Angelita down paths of darkness, doubt, and despair. In fact, she can no longer fly. At last Angelita comes to terms with loss and anger, finally recognizing her true value, and discovering where her real wings really live.

My father  wrote Angelita in 1974 when  he awoke from a dream. It came out fully formed – and in Spanish, since he was getting his Masters in Creative Writing at Mexico City College. As a middle school and high school teacher of English, Speech, Theatre, and Journalism, and since Dad always said that this little story was meant for “all of his Angelitas,” each of his special students received a copy. My sister Bobbie and I, being his real daughters, of course received our own copies first.

I have translated Angelita, and updated Dad’s, also crafting a stage production, interweaving my own songs, and characters: Angela, a troubled teen; Grama GawGaw, a crazy rock shop owner; and Æthergis, Grama GawGaw’s cat who reads and sings in Spanish. An animated film script is soon to be in the works. 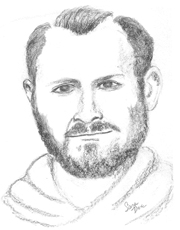 On the left, you see an illustration of Dad, drawn by Sara Dee Broderick from one of his South High School pictures when he was teaching in Denver, Colorado. Possibly many of his students will recognize him from those years. I feel it is especially essential now to continue his work. My own purpose is also helping young people discover their  “inner Angelita” and become change agents for a positive future. Now more than ever, we need the transformative power of the Expressive Arts.

As an Art Activist and teacher, I have taken kids to Russia, Mexico, and Japan to share art, music, poetry  and  stories with other cultures. It is in that quest for understanding and love that we overcome differences and build bridges. Through Angelita, I hope others will create and share their own stories, songs and art to secure a positive future for us all. Perhaps this powerful little fable will awaken something inside of you.